So it looks all quiet on the musical front..... not so, oh no. A busy summer is putting back plans to release a second album of drone ever so slightly, but musically we are busier than ever.
Last wednesday ushered in Gwdihw's first Anti-Folk 'takeover', headlined by the band I'm playing with Quiet Marauder. The brain-dead hoards were treated to wonderful twisted narratives and enthralled by tales of Vlad the Impaler, the zombie apocalypse and Alan Shearer (listen above). 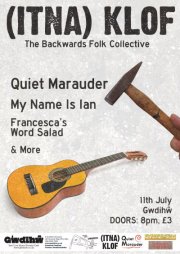 We're at The Moon Club, Cardiff on Monday, banging kettles, baking trays and numbing our frankly empty skulls in front of Belgian guests.

The allure of performing with the combined genius of Simon Read and Jonathan Day in October will mean missing what is surely the greatest festival line-up the UK has seen this year; Supersonic in Birmingham. For three days Kevin Drumm, Tim Hecker, Merzbow, Six Organs of Admittance, The Bug and the cream of weird, esoteric artists and musicians, swarm upon England's second city and abuse thousands of ears with an intense, euphoric, racket. Visit the Supersonic website here and salivate in expectancy. 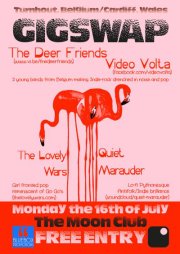 Elsewhere, my housemate and I recently went to see local ancho-acid-punk legends Sicknote. Now despite having seen (and enjoyed) Sicknote before, Friday's performance opened my eyes to a revelation of possibilities for live performance and the potential of inviting a wider audience to laptop noise, through rhythm and theatrics.

The band were excellent, previewing and releasing their forthcoming anti-conservative single 'Tory Swing', big-beats, a tonne of charisma and a certain Mr Cameron swinging urmmm rather precariously.
It got us thinking about ways with which we could combine anarchy, noise, surrealism and a 'kick-you-in-the-cunt', live show.......... The result; seven days of programming and two nights drinking, preliminary plumbing shown below and you can expect some harsh beat driven noise in the next couple of months, like Cut Hands - but better. 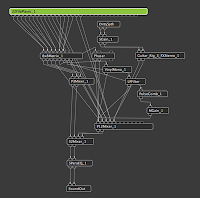