Here is recording of my set live from Genre X Genre 2, Cardiff.... the whole night is available on the Red Venice Records bandcamp, and all the other artists set's sound incredible. Due to a crash on the M4 I was pretty strapped for time, which was unfortunate, but I had a great night. Thanks to; 'To The Lovers, Farewell', Ascend Silver Poison, A (Is to B) and Mu.

'Matthew was late due to a car crash in Reading, not caused by him I might add, so we were strapped for time when he finally arrived. This was disasterous to the audience because we were robbed of a full set. The ten minutes he played for were amazing, horns were played recorded, looped and then mashed live in a caldron of sound which may have been helped and driven by the use of max/msp. Seemed that way from a distance. Matthew's strobe light added to the effect as he seemed to be lost in the light as he sat on the floor and carried out his performance. I may be stealing that idea in the near future. Epileptics need not apply'. 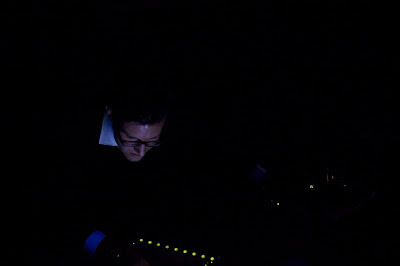 Next up; BIG BEATS FROM BADSVILLE in Cardiff..... information below.

Posted by Matthew Pastkewicz at 15:33